I was born in 1976. While I was at primary school, Margaret Thatcher was doing her best to crush the power of working people that challenged her plans. Ever since then the word “union” has been inextricably linked to strikes, unrest and conflict, and has been very effectively labeled an enemy. Even now, the only time we hear about unions are when the trains aren’t running. The very idea of workers organizing among themselves is… well, pretty unusual. 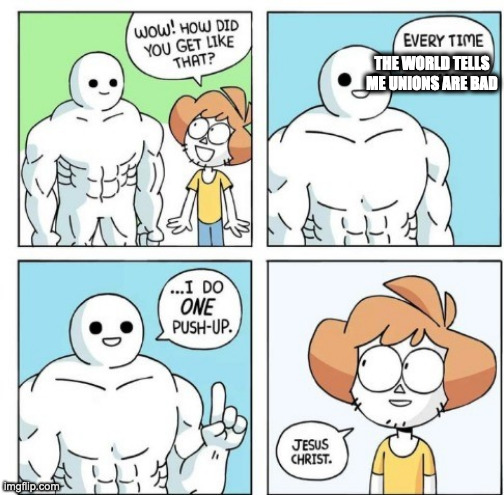 But despite it being presented as a bad thing all my life, I’ve joined a union, and I want to explain a little bit about my own views and reasons.

Important note: those reasons are not about where I currently work – they’re much wider than that. There is no subtext here, no words between the lines.

Companies are not people

While companies are made of people, they are not people, and they are subject to different laws and limitations. For instance, we all think it’s terrible that Amazon doesn’t pay “fair” taxes, but it’s legally bound to avoid paying tax wherever possible. If it didn’t, its shareholders would be entirely within their rights to sue the company for financial negligence. A company isn’t immoral; it’s amoral. Morality just doesn’t come into it. (I’d argue that the system that makes that true is immoral, but that’s a different post, or more likely a pub chat. God, I miss pub chats.)

We work in an industry that likes to think it’s progressive, but in reality, as most of us have experienced over our careers, the tech industry is full of exploitation. From games companies forcing young programmers to work weekends for 6-month-long crunches, to startups underpaying staff with the promise of worthless options; it’s also an industry rife with stress, burnout, anxiety and a whole range of other mental health issues.

So why do we need unions?

Unions are there to stop exactly this sort of exploitation. They did it in traditional industrial settings (giving us “health and safety”, aka people not getting killed), and there’s a rising tide of acknowledgment that the tech industry is in need of the same thing.

Now, I don’t work at a company in that exploitative mould; so do I need a union? No, not really, not now. But that’s not the point.

Have you got a smoke alarm? You have, right? You have an alarm in case something happens, though you sincerely hope you never need it. You didn’t wait until the house was burning down to install it, and similarly now that you have one, I assume you’re not any less careful about things catching fire – and you certainly aren’t setting fire to the sofa on purpose.

Being part of a union is the same; it’s there in case something happens. For the situations we can’t see yet. As long as nothing’s on fire, you’d never even know it was there. I don’t want to need it. But I might, one day.

And there’s one more reason too. Unionisation is weird in the tech industry, as in society as a whole. If we do it, it makes it more normal. And by making it more normal, we make it more acceptable for those people who do need it right now.

Where I work, a great many of us have our pronouns on stickers on our laptops, and introduce ourselves with them. But I don’t do that because I’m regularly misgendered; it’s because I know it helps normalise that behaviour, and that helps those among us to whom this does happen on a regular basis. It’s like masks, too – it’s not for us, it’s for others. 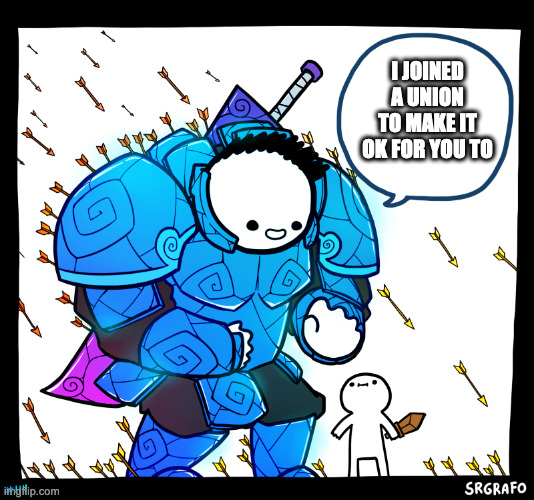 I would like to see the most progressive parts of the tech industry do the same around union relations. To show that unions aren’t the Big Bad we’ve been told about all our lives, to show that a positive engagement is possible that we can all be proud of, and to use that as a way to raise the tide and lift the boats across our wider industry, that is in desperate need of it.

If you want to discuss anything I’ve said, get in touch, and if you want to know more, I recommend taking a look at Prospect, the union I chose to become part of.