Francis Maude on the LRRA

In 2006, I wrote to my MP about the Legislative and Regulatory Reform Bill (now Act). The bill contained extremely dangerous powers for Ministers to change anything they liked, giving them the ability to get away with pretty much anything without a proper vote. I campaigned against it, with many others, through Save Parliament.

Anyway, my MP happens to be Francis Maude, who is now Minister for the Cabinet Office. It turns out that his government is now advancing a bill with similar powers, the Public Bodies Bill. Now, I admit I've not had chance to follow this in detail, so I don't know if it's as bad, or if it's more limited. However, others who know more might be interested to know what Francis Maude had to say about those sort of powers four years ago.

"I am particularly concerned at the potential for Parliament to be bypassed by the order-making powers contained in Part 1 of the Billl. These powers are extremely constitutionally significant."

"It is imperative that the circumstances in which these powers can be used are limited and clearly set out in the Bill." 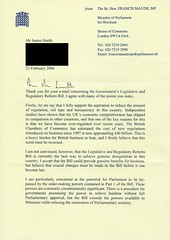 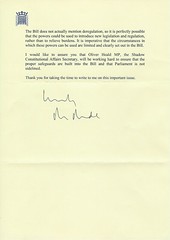 Maybe the PBB is consistent with what he said 4 years ago, but maybe not. I'd be interested to know.