I’m on the train on the way home from Electromagnetic Field 2014. It’s a sort of technology / maker festival in a field near Milton Keynes. Imagine a load of tech geeks camping in tents with laser cutters, LEDs, laptops, excellent wifi, and a robot that makes cocktails. It’s an amazing place.

I was lucky enough to get a speaking slot to talk about my current project, standing for Parliament next year. As it happened, there were two other talks on a similar theme; Tom Watson MP spoke about DRIP, and Dan Jellinek talked about digital democracy ideas and tools, so there was a common thread between all our talks.

All three of us wanted more people to get engaged in politics. Tom Watson went as far as challenging people to join their local Labour or Conservative parties and change them from the inside (which, given enough people, could totally work, though I would like to try a different path).

My talk went down really well, I think. I was very pleased with the turnout, and there were loads of great questions at the end. I came away more convinced that what I’m trying to do will resonate with a whole load of people. The new party name that I presented also went down really well, though I’ll tell you all about it in a future post - stay tuned. 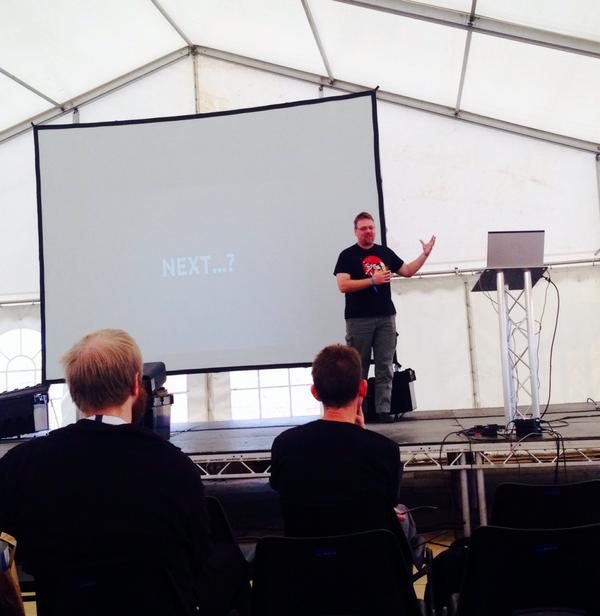 To give people a chance to discuss things further, we held an informal democracy meetup on Saturday evening. I expected a few people to turn up, but we had over 40 and packed out our tent, with standing room only. What followed was two hours of lively debate, discussion, and passion from the people who came along, and I was absolutely blown away by how much people do care, and do want to get involved.

The icing on the cake was Sunday morning. I was walking to get some breakfast and I ran into one of the participants from the night before. He told me that I’d inspired him to stand as well, which is just amazing. I’ve since had a few others email or grab me around the event saying they want to get more involved and help out somehow. I’m … honoured.