A few weeks ago, I held the first public meeting for my election campaign. It was a small affair, but it was clear that this was something that I’m going to have to do a lot more of. Whether it’s creating an appointment time for people to come and ask questions and put across concerns individually, or a group discussion, it’s good to get into a rhythm and be available to people.

I decided I wanted to basically run a public meeting a week from the beginning of October until the election. The idea is to provide a space for discussion, ideas, questions, and for people to raise issues.

They will be poorly-attended at first, but the message will spread, and starting is important. Question is, where to have them? Well, as with everything else so far, let’s look at the data!

Horsham constituency is divided into 18 wards. Just under half of them are in Horsham itself, and the rest cover the surrounding countryside and smaller towns. In order to be available to people, it would be good to run at least one event in each ward, so that people don’t have to travel too far, and see their candidate in their local community.

However, wards vary widely in population, so it’s not just a matter of going to each one once. I should really go to the larger ones more, to try and cover the population more evenly. 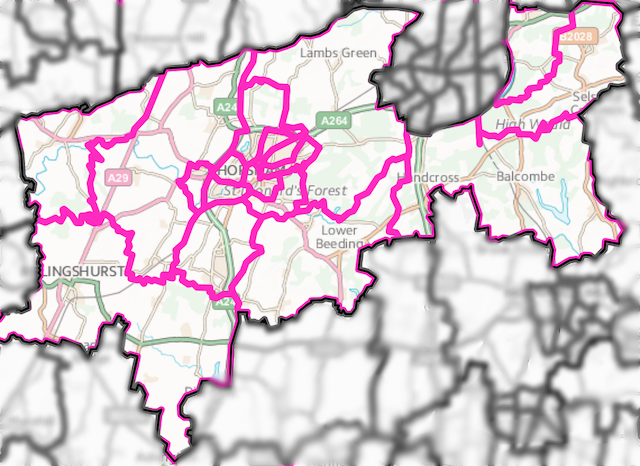 The Ordnance Survey election map shows wards as well as constituencies, so it’s easy enough to find which wards we need to cover. Each area has an “statistical identifier”, which is a unique code for that area. Helpfully, the ONS also break down their census statistics using the same identifier, so with a little bit of work, it’s pretty easy to get the adult population of each ward (16+ actually, but it was in 2011, so that’s near enough).

If we order the wards by population, and work out the number of weeks we have available, we can work out which wards we have time to visit twice. I’ve left a gap around Christmas, and for a couple of other weeks where I already know I’m prebooked on the Tuesday (which is the day I’m aiming for).

It’s not as simple as just visiting in size order though; I’ve manipulated the list and swapped a few things around so that I jump around the constituency. Ideally, every other week should be in Horsham, and the other weeks I’ll alternate east/west or north/south across the other wards. That should get me near everyone on a fairly regular basis, and avoid spending too much time concentrating on one area.

I did consider writing a bit of code to work this out, but as it was only 28 weeks and 18 locations, it wasn’t worth it. Also, it might be a variation of a very hard computer science problem, so no time for that.

As the dates turn out, I’ll hit every ward in size order after the new year, and I’m starting with events in the largest 10 between now and Christmas. Another nice thing is that the largest ward is Horsham Park, right in the middle of town, so in the week of the election hopefully we can get a nice big finish!

So, where to actually meet people? I had heard that some public buildings are available for political candidates to use for free, so I called the local council’s election officer to have a chat. As with my other conversations with election folk at various organisations, they were very helpful.

The rule seems to be that candidates can use a publicly-maintained building free of charge; however, many things like village halls, etc, are not in fact publicly maintained buildings. In fact the only places they could suggest that were widely spread across the area were schools, who apparently would be OK with being used in that way. There shouldn’t be a hire charge, but they might have to charge for caretaking; having someone to lock up, etc.

It’s not that simple either; there are more rooms available free of charge, but only once the election has actually been called, which basically means during April.

So, I’m just going to have to call a whole load of places and see what I can negotiate on a case-by-case basis. It will end up adding a fair amount to the budget too - if it costs me £30 a week for a room, times 28 weeks… erk.

But, it’s important, so it’s time to put my money where my mouth is.

So, armed with that information and a plan, I’ve started booking things, and I actually ran the first event in the series last night in Roffey North. Keep an eye on the calendar for future events, and I’ll add them as I get the venues booked in, and if you’re in Horsham, hopefully I’ll see you soon at an event near you!